Check out ChesMRC on ABC News : 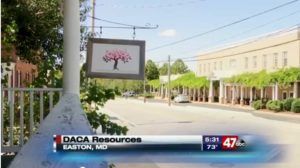 It was an announcement that left many questioning their fate. Many now are confused, wondering what their next steps will be.

But Chesapeake Multicultural Resource Center in Talbot County is hoping to help during this challenging.

Estela Ramirez is just one of the many recipients affected by the termination of DACA. Beyond being a mom, a girl scout leader, and a soccer coach, she’s also an assistant director at Chesapeake Multicultural Resource Center in Easton.

Ramirez’s own experience shaking the resource center to it’s core hoping to help those in the same exact situation.

She has a support group going, a Facebook page, so they can get information out quickly to share resources as well.

After news broke on Tuesday, this agency reacted immediately.

The director Matthew Peters says, “That night, we had an emergency meeting here we met with 10 DACA recipients, we started kind of a support group, hopefully that group grows so they know they aren’t alone.”

To show Dreamers that they have that support they are helping with the renewal process free of charge.

We are told Peters said he has heard over 2,000 individuals stories of immigrants on the Eastern Shore.

“Just to end DACA and not continue that story would be a crime against humanity if you want to say that. It would be detrimental to our communities,” Peters tells us.