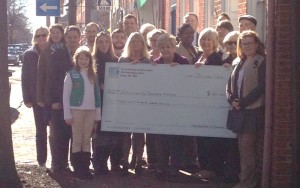 The ChesMRC was one of 20 member agencies to receive a distribution from The United Fund of Talbot County.

The United Fund of Talbot County is a local philanthropic organization that assists non-profit charities in Talbot County. They have raised more than $12 million dollars since their inception in 1955. For more information on the organization, visit www.unitedfund.org.